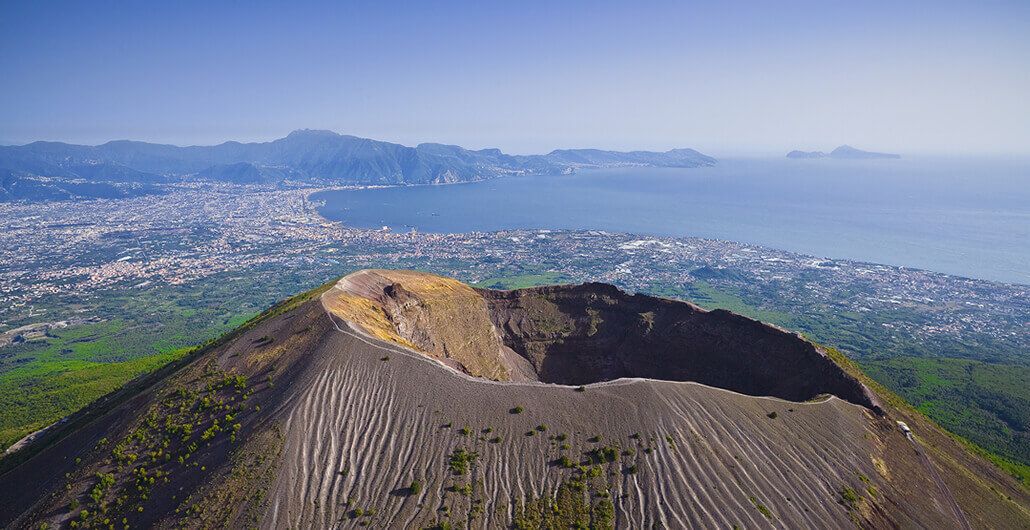 Mount Vesuvius is a stratovolcano in the Gulf of Naples, Italy, about 9 kilometres (5.6 mi) east of Naples and a short distance from the shore.

It is one of several volcanoes which form the Campanian volcanic arc. Vesuvius consists of a large cone partially encircled by the steep rim of a summit caldera caused by the collapse of an earlier and originally much higher structure.

Mount Vesuvius is best known for its eruption in AD 79 that led to the burying and destruction of the Roman cities of Pompeii and Herculaneum. That eruption ejected a cloud of stones, ash and fumes to a height of 20.5 miles, spewing molten rock and pulverized pumice at the rate of 1.5 million tons per second, ultimately releasing a hundred thousand times the thermal energy released by the Hiroshima bombing.

An estimated 16,000 people died due to hydrothermal pyroclastic flows. The only surviving eyewitness account of the event consists of two letters by Pliny the Younger to the historian Tacitus. Vesuvius has erupted many times since and is the only volcano on the European mainland to have erupted within the last hundred years.

Today, it is regarded as one of the most dangerous volcanoes in the world because of the population of 3,000,000 people living nearby and its tendency towards explosive (Plinian) eruptions. It is the most densely populated volcanic region in the world. The access to the crater is allowed, upon buying a ticket, accompanied by the local volcanological guides. From the ticket office starts a short trail 860 metres long, with a drop of 135 metres and an average slope of 14%, which in about 15-20 minutes arrives on the west crater rim (1180 metres).

The crater can be visited all year long, except when weather conditions aren't good. The crater presents inside a cavity over 300 metres deep, a circumference of the crateral rim about 500 metres long. The path continues among characteristic projections and briefly takes to the Capannuccia (1170 metres) and then to the highest point of Mt. Vesuvius (1281 metres). Shoes and dresses must be suitable for an excursion above 1000 metres of altitude on unpared terrain.